Ottawa has the good fortune of being near lots of water, mostly in the form of two rivers, the Ottawa and the Rideau.  The Rideau drains into the Ottawa.  Historically, the Rideau Canal was built to accommodate trade between Ottawa and as far as Kingston.

To facilitate boat traffic, a number of locks were installed.  In addition to the locks, dams were built, typically next to the lock, to manage the flow of water.  Near to where I live is a lock/dam called Hogs Back.  The dam side flows over a series of rocks, that are typically quite nice to look at, but with the spring melt, become a raging rapid.

So, this spring (2014), I brought my video camera down to Hogs Back to capture the wild torrents, much more wild than in other years, crazy huge flows.  After a bit of filming, a fellow asks if I am there to video the kayakers.  “Huh?”, I said.  He tells me three kayakers are suiting up getting ready to run the Hogs Back rapids.

So, I stick around and capture the following video.  Amazing stuff.  For 20 seconds in the rapids, it must have been invigorating, not to mention very cold.

For comparison, here are some pix of the flow in June,  Very pretty, but not nearly as dangerous. Note when the initial kayaker goes over the first flow, that is the same point as the first picture below.  Pretty amazing. 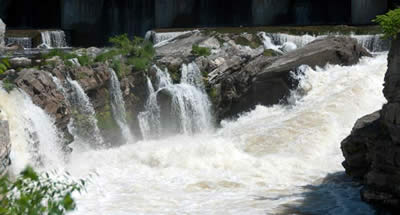 A recording technique that has long been used for interesting and amusing effect is to change the speed of the playback.  Faster would raise the pitch, slower would lower it.  In some cases, artists slowed the tape speed down during tracking to make instrument parts easier to play or to hit higher notes, and then sped up for the final mix. Other times they would adjust the tape speed during mastering to get a sound they liked more.  The timbre of the notes changes.  Guitars played back at even slightly faster speeds sound chimier.  Vocals at slightly slower speeds have a deeper resonance.

One of my favorite Beatle songs, which coincidentally used this technique, is Rain, where the master was slowed down.  The guitars sound sublime, especially that little guitar break at 2:33.

In thinking about the Beatles use of the varispeed technique, it occurred to me that the backing vocals on Magical Mystery Tour sounded like they were pitched upwards.  And indeed they are.  Here are some parts with the final version followed by the slower playback which would have been used during tracking:

On a tape machine, this was easy to do, as you just needed to flip a switch for preset speeds (typically 30ips, 15ips, 7.5ips and 3.75ips), or change the voltage to the capstan motor (varispeed) for continuous increments.  In the digital world, this is, surprisingly, not  straight forward.  Pitch tuning (Autotune, Melodyne, …) allows you exceptional ability to change notes.  But this does not sound the same to me, and more extreme changes result in artifacts that sound bad.  Changing the playback speed for recording or mastering takes a couple of extra steps.

All that to say, as a little exercise, I took a run at Alvin and the Chipmunks, to see what the real voice behind the little critters actually sounds like.  Here is the amusing result at half-speed, from the original 1958 recording of Witch Doctor that started it all for Alvin:

… the opening chord of A Hard Days Night has been successfully dissected.

In this radio interview with Randy Bachman on CBC’s Guitarology program, RB talks about meeting Giles Martin, son of George Martin, at GM’s private studio at Abbey Road. In the studio, GM has access to digitized copies of all the Beatle’s multitrack source tapes.

After pondering what he would like to hear, RB is provided with solo’d track by track playback of “the chord”.  When it is all put together, HE NAILS IT!  Give it a listen …

Here is the breakdown he describes:

The notes being picked up are:  A-C-D-F-G

Closest thing to call it would be a Dm11 or an F6add9.  Whatever you call it, you can’t make the chord sound properly with only one hand (chording) and one guitar.

What a sound. This is TOO COOL!!

One of my favorite sites is gearslutz.com, where people, mostly sound engineer types, talk about … gear.  Most of the time, the conversations are about experiences with specific pieces of recording equipment or techniques.  Some can be offbeat and really amusing, like this one — He Is…the Most Interesting Gear Slut!

Basically, assembling all the collected wisdom, knowledge and opinion about gear, talent and luck, and packaging it as hyperbole.  Here are some samples:

How does one rise above an ocean of talent?  Well, sex sells, we all know that.  On the international stage, gender exhibitionism and gender confusion clearly help bring attention to yourself.  Of course, gender bending is not new among entertainers — Bowie, Marilyn Manson, Boy George, Madonna, Lady Gaga, Annie Lennox, are all or have been gender opportunists, that exploit gender and gender ambiguity as suits them at the time, invariably to shock.

All that to say, the latest in the parade of gender opportunists is the 2014 winner of the Eurovision music content, Conchita Wurst, an intriguing transgender entertainer from Austria.  Here is his/her performance of Rise Like a Phoenix:

The video is well conceived, and the song is an exceptional platform for Conchita. It could easily be the theme song for a James Bond film.

Conchita’s real name is Tom Neuwirth.  I have to say, for me the beard is disconcerting in this context. As it is meant to be, no doubt. However, that is a minor distraction, as the performance, the presentation and the song are exceptional.

Here is a photo of ungendrified Tom:

Along the same gender ambiguity meme, here is a great video by French artist Stromae, and his/her performance of Tous Les Mêmes (All The Same):

“I spent half my money on gambling, alcohol, and wild women.  The other half I wasted.” – WC Fields

Here is a visualization prepared by data scientist Seth Kadish.  The chart presents the house odds in gambling in Las Vegas casinos, the percent of wagered money won by the house against the total revenues for the week.  For example, if $100 is wagered on blackjack, the house will take 11%, or $11.  The data comes from reports published by the Nevada Gaming Control Board .

You should already know that the house always wins, or more precisely, the odds favor the house.  If it doesn’t, they unilaterally convict you of card counting and ban you from ever playing in the casino again.

The chart is hard to read here, so if you want to see the detail, go to Seth’s site.  The pithy summary is:

This is not to condemn gambling, but it *is* a money pit.  Thanks for playing.